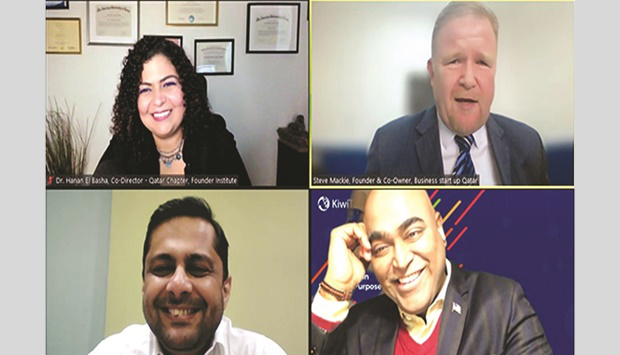 Rapid globalisation and connectivity through tecnnologicl advancements are among the factors that contributed to the increase in venture capitalists (VCs) in the Middle East region, according to an industry expert. “There has been a collective awareness in terms of the growth of the number Of VCs in the Middle East region," said Dr Hanan el-Basha, co-director at the Qatar Chapter of Founder Institute, during the 'Midele East Venture Fair'. a virtual forum organised recently by KiwiTech.
“The collective vision right now of the region is to create more unicorns that come out of the Middle East," said el-Basha, who was joined co-panellists Awdesh Chetal, venture partner, Risin Ventures; Mohsin Syed, EVP chief startup officer, KiwiTech; and Steve Mackie, founder and co-owner, Business Startup Qatar, as panel moderator.
According to el-Basha, small and medium sized enterprises (SMEs), which constitute "90% to 99% of worldwide economies,” are driving innovation, employment and agility of the markets.
“And what we have seen during the pandemic in the last couple of years was that agility and adaptability were the secret ingredients to survivability. Startups are important for having a role within the international and global markets, but it is also driven by technology, funds, and support.
“If we look at the overall entrepreneurial ecosystems within the region that are coming up, we can divide them into three Es: entice, educate, and enablers. I think the rise in VCs is because of globalisation or because of connectivity through technology,” she explained.
El-Basha said the trend has gone beyond the fields of energy and real estate since the 2008 financial crisis, “which created a lot of lessons.” She noted that the financial crisis also showed that it was necessary to expand to different sectors and segments. “That’s where the variety of different options and segments that technology-based businesses are starting to become viable and attractive.”
El-Basha also explained that businesses that are “sustainable and scalable” are what VCs are looking for in the Middle East.
“Scalable means that the business could be expanded into other markets or whether it could be localised to other markets or not. In terms of sustainability, VCs will not invest in a company that could disappear; the concept of it becomes untrendy or it disappears within one to three years. These are the two basic elements,” she said.
She added: “Beyond that, what would VCs be looking for? In the region, there is a rise in the fields of ‘edtech’ and ‘healthtech’. Within Qatar, there is ‘sportstech’, which is an up-and-coming field because Qatar’s vision has been focusing on education and sports as main pillars. Of course, everything fits in fintech; if you don’t have fintech, all other tech-based businesses will not be able to function to the best of their ability.”

Hyperthings provides a comprehensive IoT platform that allows various stakeholders to define, build and go live with their IoT applications on a steadfast, reliable, and scalable IoT platform. Ask our team for a free demo. You’ll learn about the platform features and find out how hyperthings can help you develop your IoT product.

Fill the form and someone from our team will get in touch with you to set up a 1:1 demo.